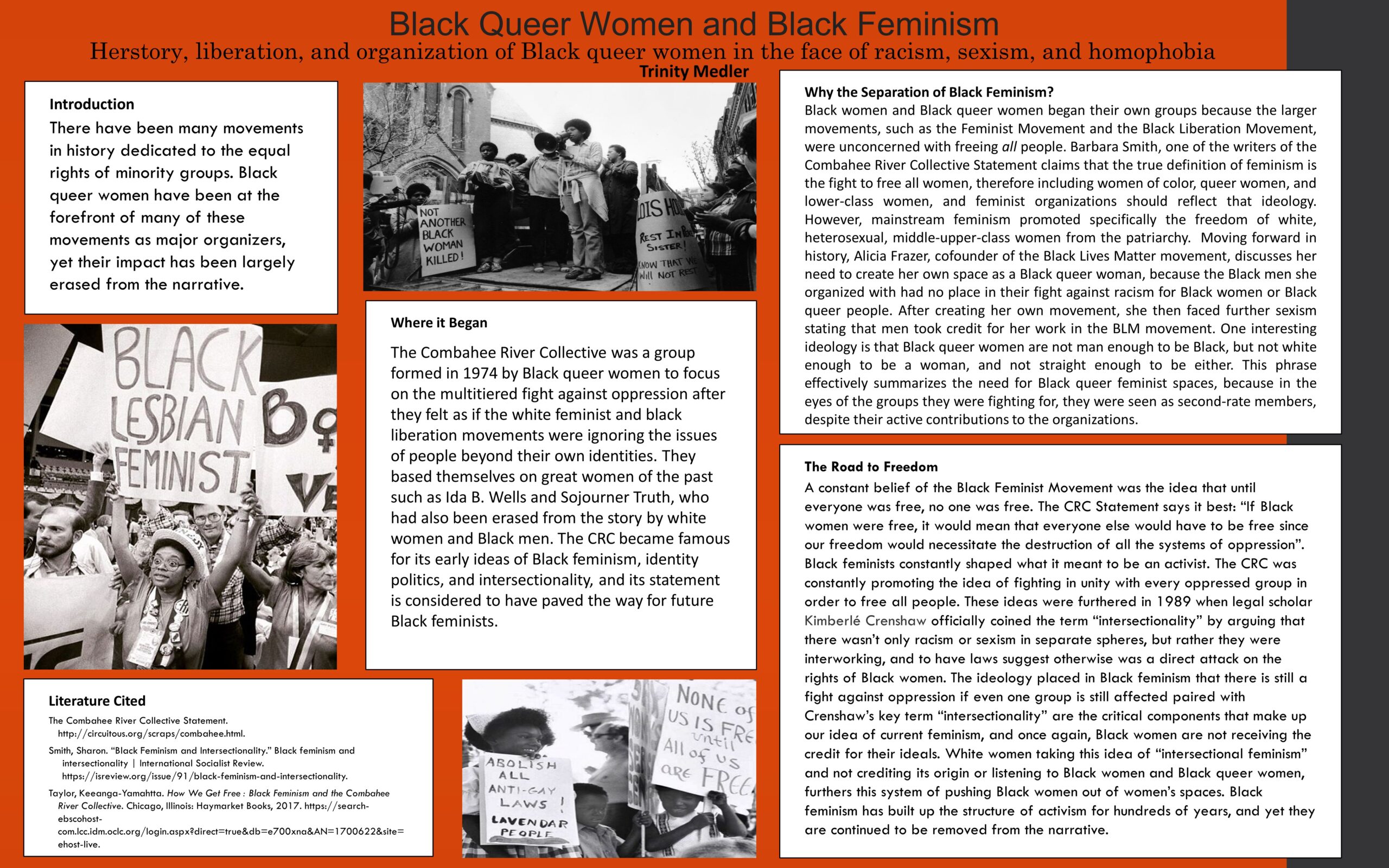 There have been many movements in history dedicated to the equal rights of minority groups. Black queer women have been at the forefront of many of these movements as major organizers, yet their impact has been largely erased from the narrative.

The Combahee River Collective was a group formed in 1974 by Black queer women to focus on the multitiered fight against oppression after they felt as if the white feminist and black liberation movements were ignoring the issues of people beyond their own identities. They based themselves on great women of the past such as Ida B. Wells and Sojourner Truth, who had also been erased from the story by white women and Black men. The CRC became famous for its early ideas of Black feminism, identity politics, and intersectionality, and its statement is considered to have paved the way for future Black feminists.

Why the Separation of Black Feminism?

Black women and Black queer women began their own groups because the larger movements, such as the Feminist Movement and the Black Liberation Movement, were unconcerned with freeing all people. Barbara Smith, one of the writers of the Combahee River Collective Statement claims that the true definition of feminism is the fight to free all women, therefore including women of color, queer women, and lower-class women, and feminist organizations should reflect that ideology. However, mainstream feminism promoted specifically the freedom of white, heterosexual, middle-upper-class women from the patriarchy.  Moving forward in history, Alicia Frazer, cofounder of the Black Lives Matter movement, discusses her need to create her own space as a Black queer woman, because the Black men she organized with had no place in their fight against racism for Black women or Black queer people. After creating her own movement, she then faced further sexism stating that men took credit for her work in the BLM movement. One interesting ideology is that Black queer women are not man enough to be Black, but not white enough to be a woman, and not straight enough to be either. This phrase effectively summarizes the need for Black queer feminist spaces, because in the eyes of the groups they were fighting for, they were seen as second-rate members, despite their active contributions to the organizations.

The Road to Freedom

A constant belief of the Black Feminist Movement was the idea that until everyone was free, no one was free. The CRC Statement says it best: “If Black women were free, it would mean that everyone else would have to be free since our freedom would necessitate the destruction of all the systems of oppression”. Black feminists constantly shaped what it meant to be an activist. The CRC was constantly promoting the idea of fighting in unity with every oppressed group in order to free all people. These ideas were furthered in 1989 when legal scholar Kimberlé Crenshaw officially coined the term “intersectionality” by arguing that there wasn’t only racism or sexism in separate spheres, but rather they were interworking, and to have laws suggest otherwise was a direct attack on the rights of Black women. The ideology placed in Black feminism that there is still a fight against oppression if even one group is still affected paired with Crenshaw’s key term “intersectionality” are the critical components that make up our idea of current feminism, and once again, Black women are not receiving the credit for their ideals. White women taking this idea of “intersectional feminism” and not crediting its origin or listening to Black women and Black queer women, furthers this system of pushing Black women out of women’s spaces. Black feminism has built up the structure of activism for hundreds of years, and yet they are continued to be removed from the narrative.

Emmett Till and the Start of Civil Rights Movement