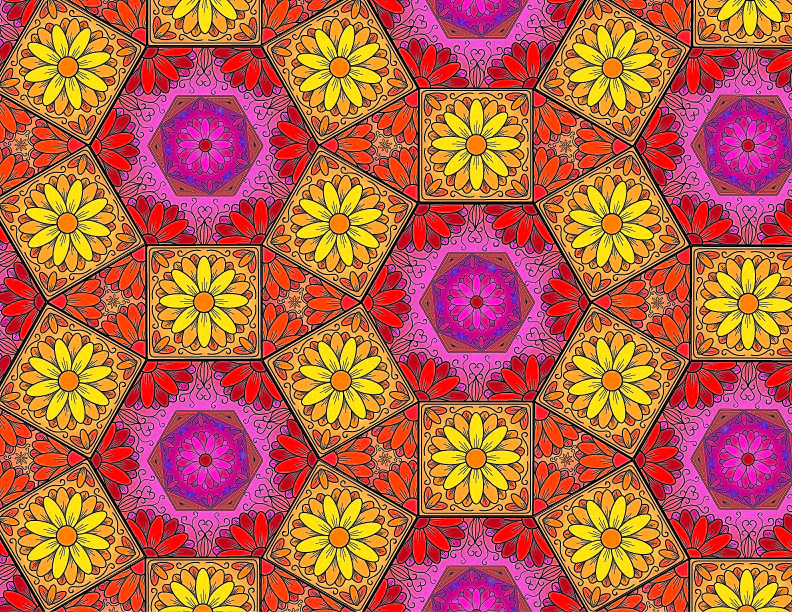 For the class’s final project we were supposed to take something that we had learned this semester and make an art piece out of it. I chose to do one of the 8 semi-regular tessellations, specifically the 6-4-3-4 tessellation. I began this project by sketching several different concepts for each shape, coming to the conclusion of wanting to do flowers. I then began creating templates for each shape, making sure each shape had the right angles and the same side length measurements (1 inch). The angle measures needed were 90 degrees (square), 60 degrees (triangle), and 120 degrees (hexagon).

I then took a picture of the shapes and transferred it into Adobe Illustrator. I began constructing the flowers and various things I wanted inside the shapes and slowly started piecing it all together. This was the part that took the longest; getting the colors to look how I wanted them, and the shapes to line up in the correct ways was a bit frustrating. Once I had the arrangement of shapes how I wanted them I just repeated the shapes over and over again till my area was completely filled with the shapes I had just created. I thought this would be an image that could be used as either a background or I thought it reminded me of those meditation coloring book pages that are just a bunch of shapes if it wasn’t in color and was just the line work.

Media Description: A 6-4-3-4 semi-regular tessellation with vibrant yellows, oranges, pinks, and reds with each shape containing a different arrangement of flowers.