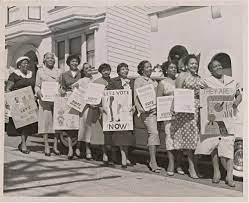 Women in the Civil Rights Movement

My research project will be available soon, below is my project presentation where I have outlined my main points to my research project. Around the 1950’s the Civil Rights Movement began, many major changes in society were made from then to now. Mostly with colored rights and women’s rights. Many events took place, and many groups were created that helped create change for the people in society. Then in around the 1960’s a group called the SNCC was created, this was a student nonviolent committee that raised awareness for poor southern blacks on freedom. Just as most people do not see how important women figures are on a daily basis, many people fail to see the roles that women took in the SNCC’s development and how imperative they were in keeping the organization going.

Hopefully we all know that women are incredible super humans today. From simply being a mother, taking care of the children, looking after the household, cooking, and cleaning, today women also have full time jobs, sometimes more and are still to handle all the other motherly responsibilities. It is astonishing the number of things a women will do everyday but sometimes it doesn’t feel like we are recognized or appreciated for all the things we as women have to do. Well back when the civil rights movement began many women had multiple roles in society as well. When you ask someone about the civil rights movement and who the heroes were, many would likely say Martin Luther King, or Malcolm X, which they were great, but it is also true that success of the civil rights movement hinged on the dedication and selflessness of many women whose names are not as significantly known today. Along with women’s daily lives, they also played other important roles in the civil rights movement. They led organizations and vocalized a demand for equality.

Ella Baker was a highly respected civil rights leader who worked mostly behind the scenes, she advised, supported, and mentored other great leaders such as MLK Jr., Rosa Parks, Baker’s reputation as a leader and movement builder earned her the nickname. “Fundi”. Another women leader was Daisy Bates, she was a newspaper publisher who documented the fight to end segregation and discrimination. She became the president of the Arkansas chapter of the NAACP (National Association for the Advancement of Colored People) and played a crucial role in desegregation. Fannie Lou Hamer dedicated her life to fighting for racial injustice and promoting the African- American Vote, and voice in politics. She also co-founded the Mississippi Freedom Democratic Party in 1964 and ran for Congress in Mississippi in 1965. Dorothy Height spent her focus on improving the opportunities of African American women. Height was a key organizer of the march in 1963 in Washington, working with major civil rights activist, including MLK Jr. For the many contributions height made toward the Civil rights movement, she was awarded the Presidential Medal of Freedom in 1994.

Thankfully because of the bravery, planning, and actions taken by all those who experienced the movement we can live a life of more equality. I think that women took a big part in the movement and also have their own movement to fight for.

Media Description: Photograph of women activists with signs for voter registration from the National Museum of African American History and Culture

Non-violence in the civil war

Why Is Teaching Critical Race Theory in Schools Important to Healing the Division In the United States?