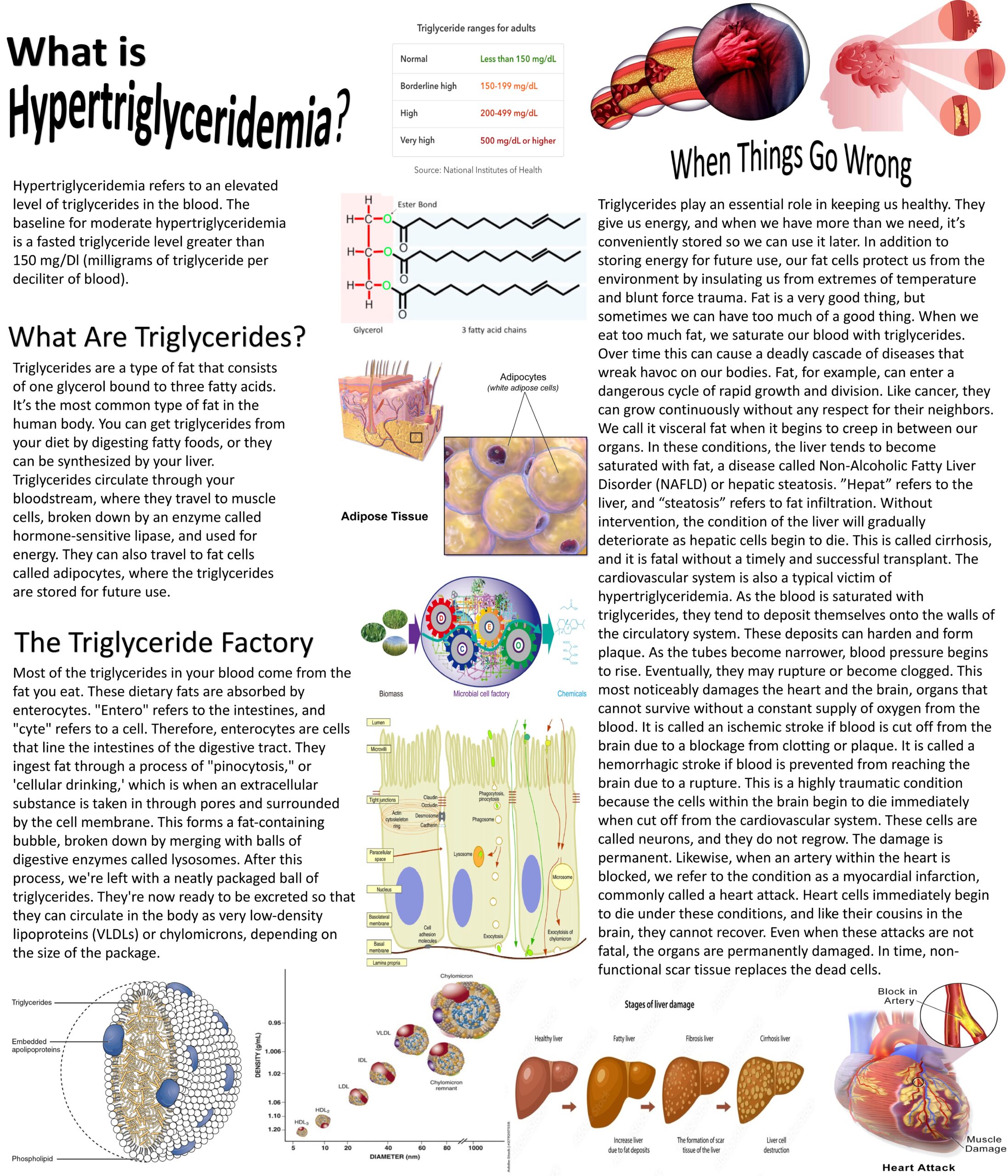 This tongue twister of a term is a combination of a couple of basic words. “Hyper-” is used when there’s an excess of something. A “triglyceride” is a fundamental fat molecule. “-emia” refers to the presence of something in the blood. Put them together, and you have a lot of fat in your veins. This presentation will show you how this happens and where it all goes wrong.

Triglycerides are a type of fat that consists of one glycerol bound to three fatty acids. It’s the most common type of fat in the human body. You can get triglycerides from your diet by digesting fatty foods, or they can be synthesized by your liver. Triglycerides circulate through your bloodstream, where they travel to muscle cells, broken down by an enzyme called hormone-sensitive lipase, and used for energy. They can also travel to fat cells called adipocytes, where the triglycerides are stored for future use.

Most of the triglycerides in your blood come from the fat you eat. These dietary fats are absorbed by enterocytes. “Entero” refers to the intestines, and “cyte” refers to a cell. Therefore, enterocytes are cells that line the intestines of the digestive tract. They ingest fat through a process of “pinocytosis,” or ‘cellular drinking,’ which is when an extracellular substance is taken in through pores and surrounded by the cell membrane. This forms a fat-containing bubble, broken down by merging with balls of digestive enzymes called lysosomes. After this process, we’re left with a neatly packaged ball of triglycerides. They’re now ready to be excreted so that they can circulate in the body as very low-density lipoproteins (VLDLs) or chylomicrons, depending on the size of the package.

Triglycerides play an essential role in keeping us healthy. They give us energy, and when we have more than we need, it’s conveniently stored so we can use it later. In addition to storing energy for future use, our fat cells protect us from the environment by insulating us from extremes of temperature and blunt force trauma. Fat is a very good thing, but sometimes we can have too much of a good thing. When we eat too much fat, we saturate our blood with triglycerides. Over time this can cause a deadly cascade of diseases that wreak havoc on our bodies. Fat, for example, can enter a dangerous cycle of rapid growth and division. Like cancer, they can grow continuously without any respect for their neighbors. We call it visceral fat when it begins to creep in between our organs. In these conditions, the liver tends to become saturated with fat, a disease called Non-Alcoholic Fatty Liver Disorder (NAFLD) or hepatic steatosis. ”Hepat” refers to the liver, and “steatosis” refers to fat infiltration. Without intervention, the condition of the liver will gradually deteriorate as hepatic cells begin to die. This is called cirrhosis, and it is fatal without a timely and successful transplant. The cardiovascular system is also a typical victim of hypertriglyceridemia. As the blood is saturated with triglycerides, they tend to deposit themselves onto the walls of the circulatory system. These deposits can harden and form plaque. As the tubes become narrower, blood pressure begins to rise. Eventually, they may rupture or become clogged. This most noticeably damages the heart and the brain, organs that cannot survive without a constant supply of oxygen from the blood. It is called an ischemic stroke if blood is cut off from the brain due to a blockage from clotting or plaque. It is called a hemorrhagic stroke if blood is prevented from reaching the brain due to a rupture. This is a highly traumatic condition because the cells within the brain begin to die immediately when cut off from the cardiovascular system. These cells are called neurons, and they do not regrow. The damage is permanent. Likewise, when an artery within the heart is blocked, we refer to the condition as a myocardial infarction, commonly called a heart attack. Heart cells immediately begin to die under these conditions, and like their cousins in the brain, they cannot recover. Even when these attacks are not fatal, the organs are permanently damaged. In time, non- functional scar tissue replaces the dead cells.

Media Description: "What is Hypertriglyceridemia" poster