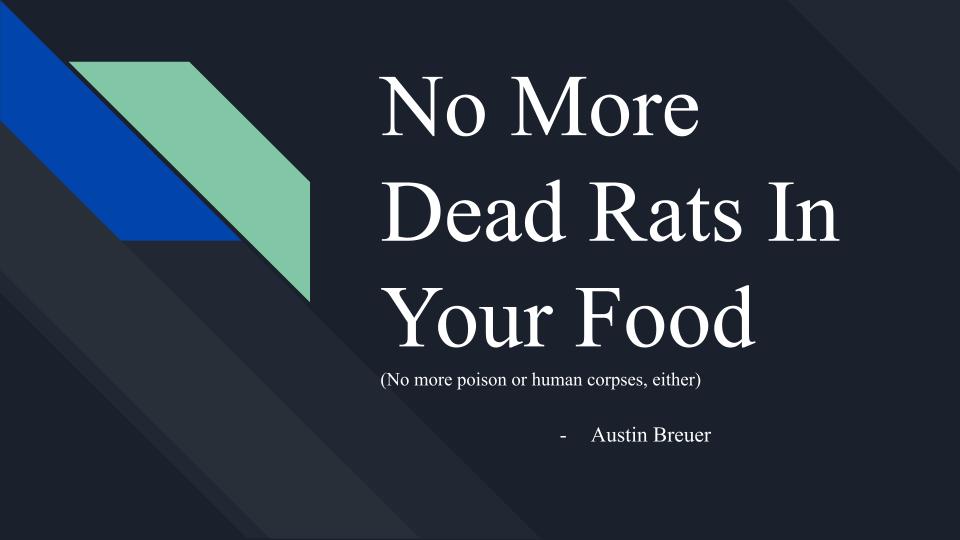 Progressive Motion for Governmental Reforms For Food and Drugs

The Progressive Social Movement for Safer Food and Drugs

The existence of muckraking newspaper articles and novels, the public outcry they spurred, the selfless actions of Harvey Washington Wiley and his volunteer poison squads, and the legislative efforts to bring better conditions to the meat packing and pharmaceutical industries all display the fight for safer consumer goods. A fight that continues even to this day.

People care about the safety of their consumables. They will persistently fight for better human conditions once they are made aware of issue. Without banding together, change is nearly impossible in the face of extreme wealth and corporate greed. As a unified, organized force, positive change can be won, but in a slow process which will perhaps never fully achieve the desired results.

The Jungle by Upton Sinclair

The Socialist newspaper The Appeal, began publishing the first serialized content of Upton Sinclair’s then work-in-progress novel known as The Jungle in 1905.

The story exposed the horrific conditions and allowances of chemicals, deceased animals and human waste and more of the Chicago meat-packing industry at the time.

Public outcry called for major reform in the regulatory capabilities of the federal government of the United States.

In 1906, the Pure Food and Drugs Act passed both the House of Representatives and the Senate to then be signed into law by President Theodore Roosevelt.

This law prohibited the interstate transportation of mislabeled or adulterated food and drugs.

For the first time in American history, companies had to tell their consumers what ingredients were included in their products, and the quantities of the ingredients.

The people who fought for corporations to be regulated to the benefit of the American consumer did so at great cost to their own selves. People like Upton Sinclair risked their reputation to defamation against well-funded opponents behind the mega corporations they sought to expose.

There were people like Harvey Washington Wiley, a scientist who gathered groups of volunteers to test foods for adulterants, at the very risk of their own health.

Wiley’s Poison Squads voluntarily ate foods containing chemicals such as formaldehyde and borax. Their purpose was to prove the adverse health effects such ingredients caused in humans.

Mock kitchens were built so that the squads could consume solely the products suspected of adulteration. The scientific method in action gathered data to be used as evidence against the use of dangerous chemicals as additives and preservatives.

For all the scientific evidence these poison squads were able to unveil, the public support for the federal government to step in and disallow corporations from unsafe practices increased.

Opening the eyes of the  public to injustice and unhealthy practice is a necessary first step towards progress.

Once the average person is aware that an issue exists, they must be in a state of understanding as to how said issue affects them personally.

With personal stakes involved, the masses will throw their support into the camp of progressive change.

Proving to those in positions of power to enact direct change that the issue at hand cannot be ignored is critical in moving forward.

Continuing to fight for ongoing change in the fields of issue where the previous steps have been met is the forever task.

American socialists such as Upton Sinclair laid efforts to further their socialist agenda in the country. Thanks to these efforts, corruption at the heads of capitalist industry were exposed to the American public. While the efforts to push socialism never managed to succeed in their intended political and economical ways, the efforts did bring about momentum for change.

The momentum from these socialists as well as people in power such as President Theodore Roosevelt pushed for legislative reform in industries. With the passage of laws that restricted transportation, sale, and misinformation of adulterated food and drugs, the power of the federal government would be elevated slightly. Despite what some may claim, laws such as the Pure Food and Drugs Act of 1906 did not give the federal government ultimate authoritative powers over the free market.

With the strength of the unified masses and a just cause to rally behind, marginal change can be fought for and won. It is in the maintaining of progress that work must never end.

The Path To A Brighter Future: A Journey On How Women’s Rights Came To Be