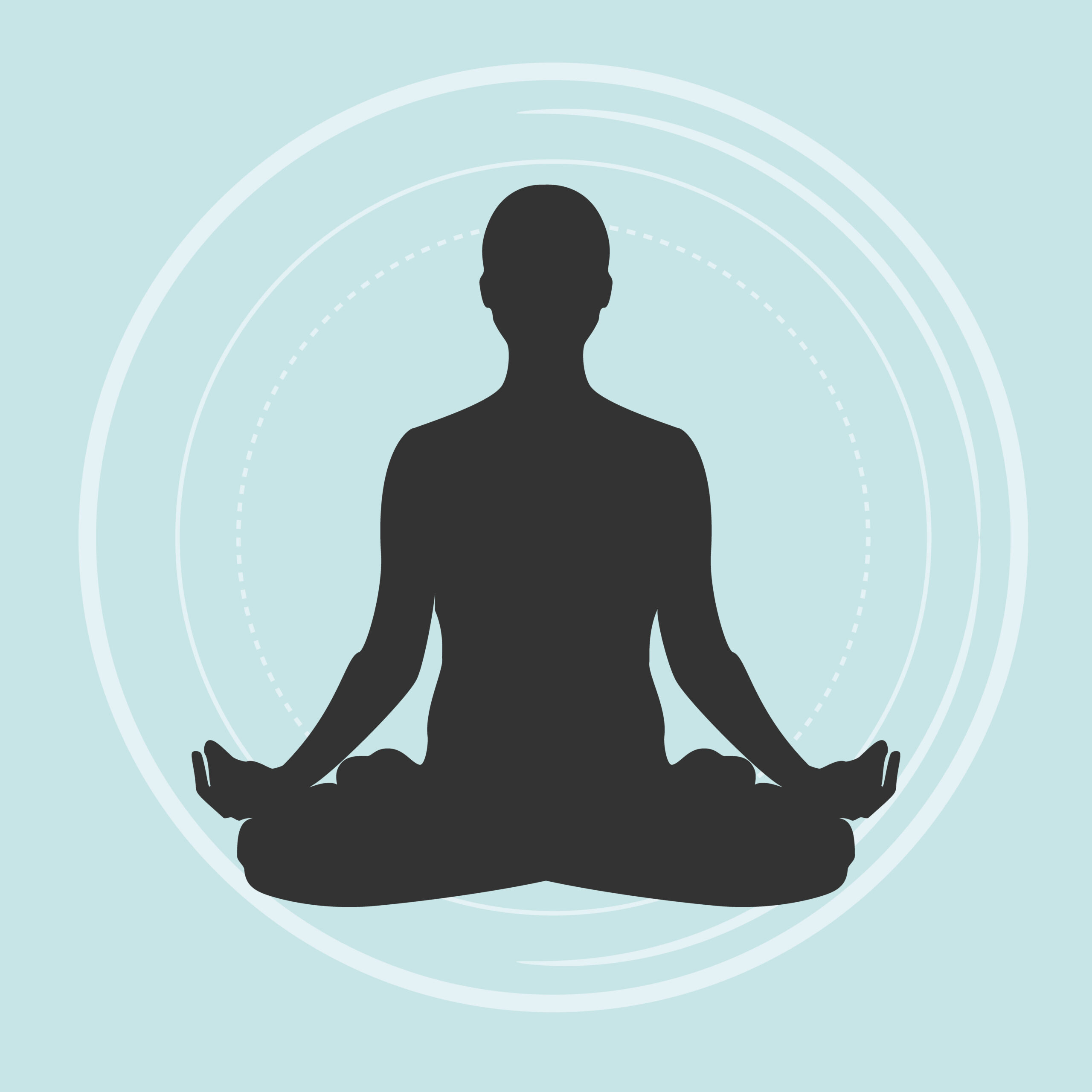 Meditation is a practice of mind-body balance or mindfulness that has been used around the world for as long as 5000 years in some cultures.  Over the last several decades, there have been multiple studies to determine the effects and benefits of meditation on physiological and psychological health.  There are different forms of meditation that can be loosely categorized into either insight meditation or concentration meditation, and each form may produce different physiological results.  Meditation is anecdotally known for its calming effect and is frequently studied to investigate the way it can influence heart rate variability.  Increased heart rate variability is an important indicator of increased parasympathetic activity and decreased sympathetic activity (Damerla, et al. 2018; Kamath. 2013; Krygier, et al, 2013; Nesvold, et al. 2011; Phongsuphap, et al. 2007).

This study used a 10-minute meditation video, intended for beginners, that featured a form of concentration meditation (7).  A separate short video on how to measure resting heart rate on the wrist was presented to the subjects as well (8).  A resting heart rate taken at the wrist is a non-invasive and easy way to collect the data and allows individuals to do it on their own.

11 participants (six females and five males) ranging in age from 30-62 years were chosen based on proximity to the study and willingness to participate.  All participants completed both trials and followed the proposed methodology.  Participants were provided 2 website links to videos with information needed to complete the study.  The first video link’s purpose was to familiarize the participant with the process of recording their own heart rate, a process they were asked to repeat four times per trial. Understanding of the heart rate recording process were self-reported by participants. 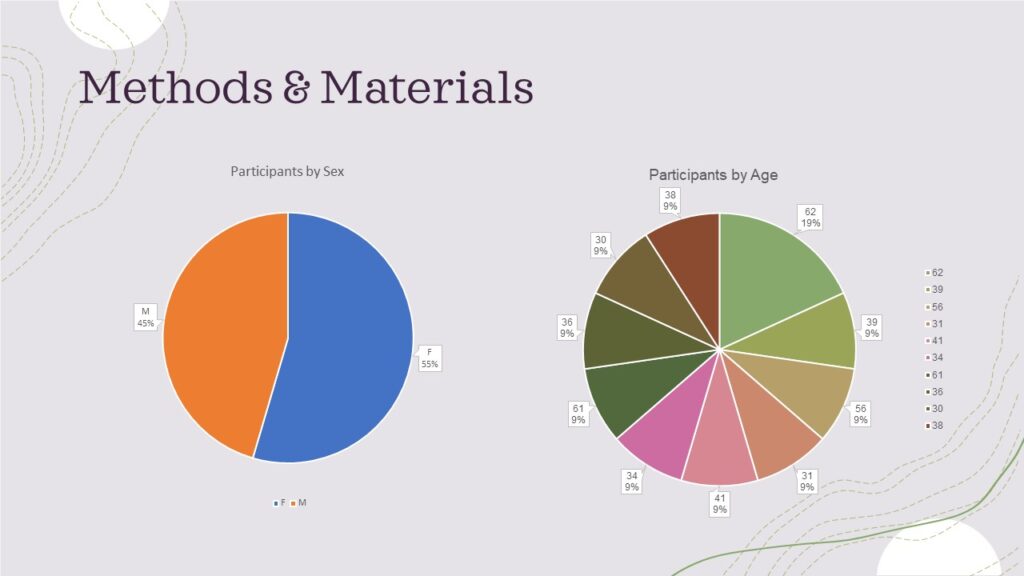 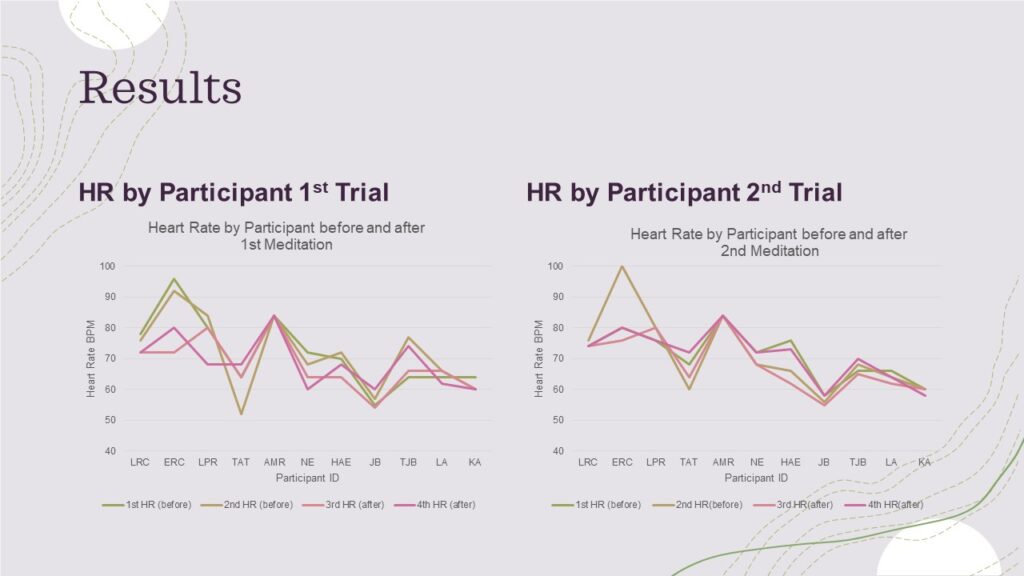 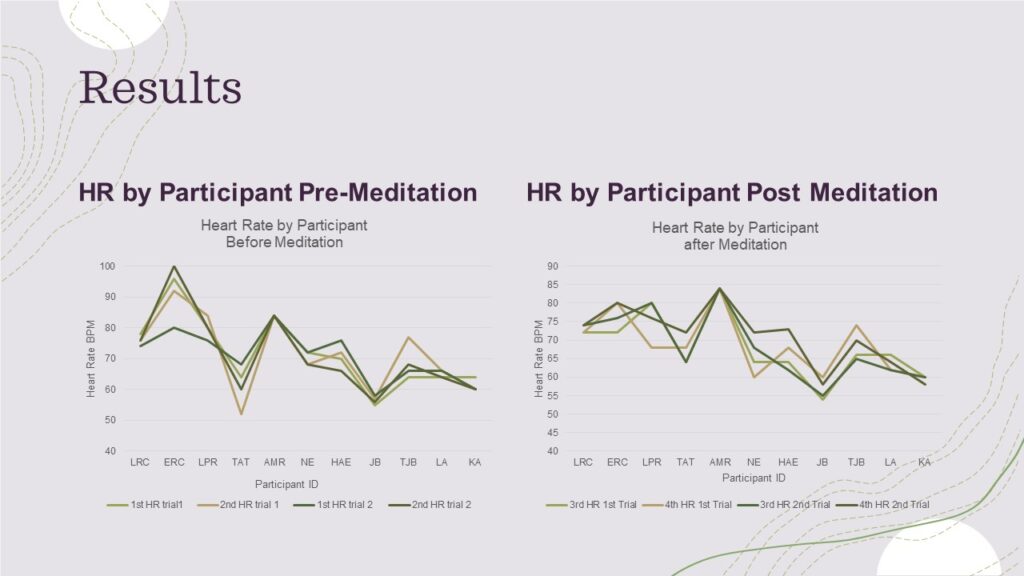 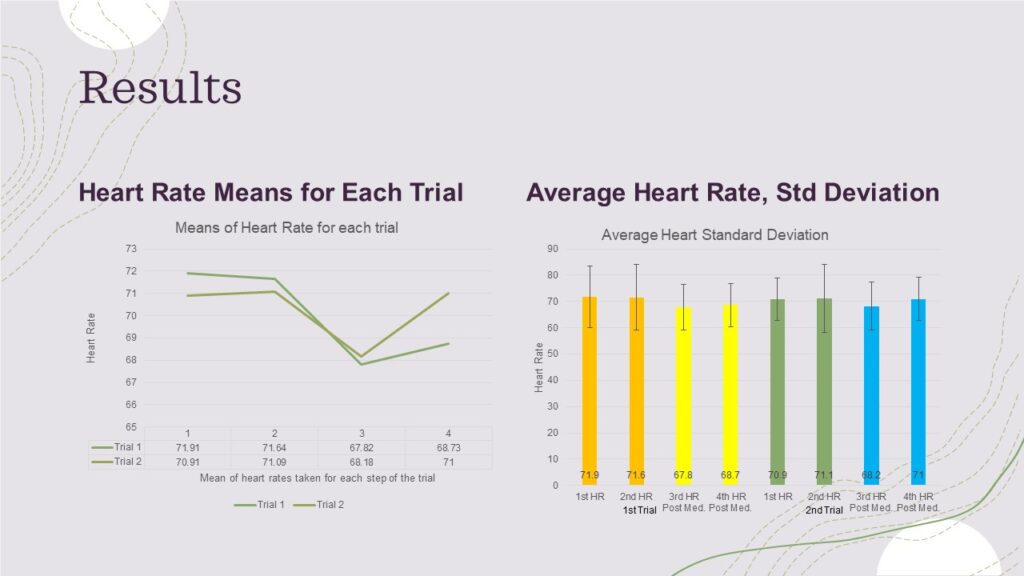 HRV and RHR is controlled by the Autonomic Nervous System (ANS). The ANS is split into the Sympathetic Nervous System (SNS) and the Parasympathetic Nervous System (PNS). In healthy functioning individuals, the normal RTR is about 72 beats-per-minute.  Both sympathetic and parasympathetic neurons innervate the heart.  Increases in SNS activity result in a higher frequency of action potentials being released, which in turn increases heart rate (HR) and cardiac output (CO).  The PNS has the opposite effect- when activated, the PNS decreases the rate of spontaneous depolarization by releasing acetylcholine, resulting in less action potentials, decreasing the heart rate.  Meditation is thought to increase PNS activity, thereby lowering RTR.  This aligns with Damerla et al’s study; “Therefore, SNS and PNS operate antagonistically, and an increased HRV is observed under dominance of PNS activity…. Based on our study, we can conclude that mantram chanting leads to predominance of PNS in the sympatho-vagal balance. Consequently, elevated PNS activity induces smoother beat-to-beat variations of the heart, an indicator of increased HRV. The HRV curve patterns, changed from that of an erratic HR to a more regular and lower amplitude seen in states of relaxation associated with positive emotional states, validate the findings of Wolf and Abell” (Damerla et al, 2018).

Changes in heart rate will directly cause changes in mean arterial pressure (MAP) that are detected by arterial baroreceptors.  The arterial baroreceptors are responsible for regulating and inducing responses in both the SNS and PNS in response to changes in MAP (Stanfield, C.L. 2017).  “Based on physiological explanation of spectral components, it indicates that mediation may have the following health benefits: resetting baroreflex sensitivity, increasing parasympathetic tone, and improving efficiency of gas exchange in the lung.” (Phongsuphap, et al. 2008).

High HRV indicates that the body is able to adjust for a variety of circumstances and adjust HR and CO as required.  Low HRV is a possible indicator of susceptibility to stress and disease. This study found that meditation is reliably helpful in lowering RTR and has potential to be a useful tool in increasing the range of HRV, or in practicing HRV.  Kamanth found that the study of the effects of meditation on PNS activity could contribute to our understanding of the mind-body connection; “PNS activity is greatly enhanced during meditation compared to that before meditation.” (Kamanth, 2013).  Our study’s initial results concur with this finding.

When analyzing each participant’s data, the most significant findings were that most participants had decreased RTR immediately post meditation.  The RTR for most participants then increased in the 30min post meditation.  This indicates that the effect of the meditation on lowering RTR is temporary.  As Krygier et al found, “These techniques – such as quieting the mind and exercising self-control – can have a profound influence on mind and body, and show promise as an alternative tool to regulate emotions, mood, and stress. However, the acute and longer-term concomitants of mindfulness meditation training, and potential mechanisms of action are still not well understood” (Krygier et al, 2013).  The fact that the standard deviation was so large also indicates that comparing between participants is not as indicative of HRV range as comparing the participant’s RTR post meditation to their own data pre-meditation.  There is great variation among individuals in the study.

Problems that the study encountered was a small study size of only 11 participants, only having two trials per participant, and relying on each participant to correctly take their heart rate.  Collecting heart rate data from participants is a non-invasive and straightforward for individuals to do, but other forms of data that could be collected such as heart rate variability, blood pressure variability, and/or baroreflex sensitivity may have had more conclusive results.  This study did not monitor or include the effects of circulating hormones (such as epinephrine, which tends to raise the heart rate), or physically prevent or rule out distractions, interruptions, or any other outside influences that could have impacted the reported data.  This study also did not include a way for participants to give feedback or additional information about their experience with the study. More trials and a larger study size would have also potentially yielded more conclusive results.