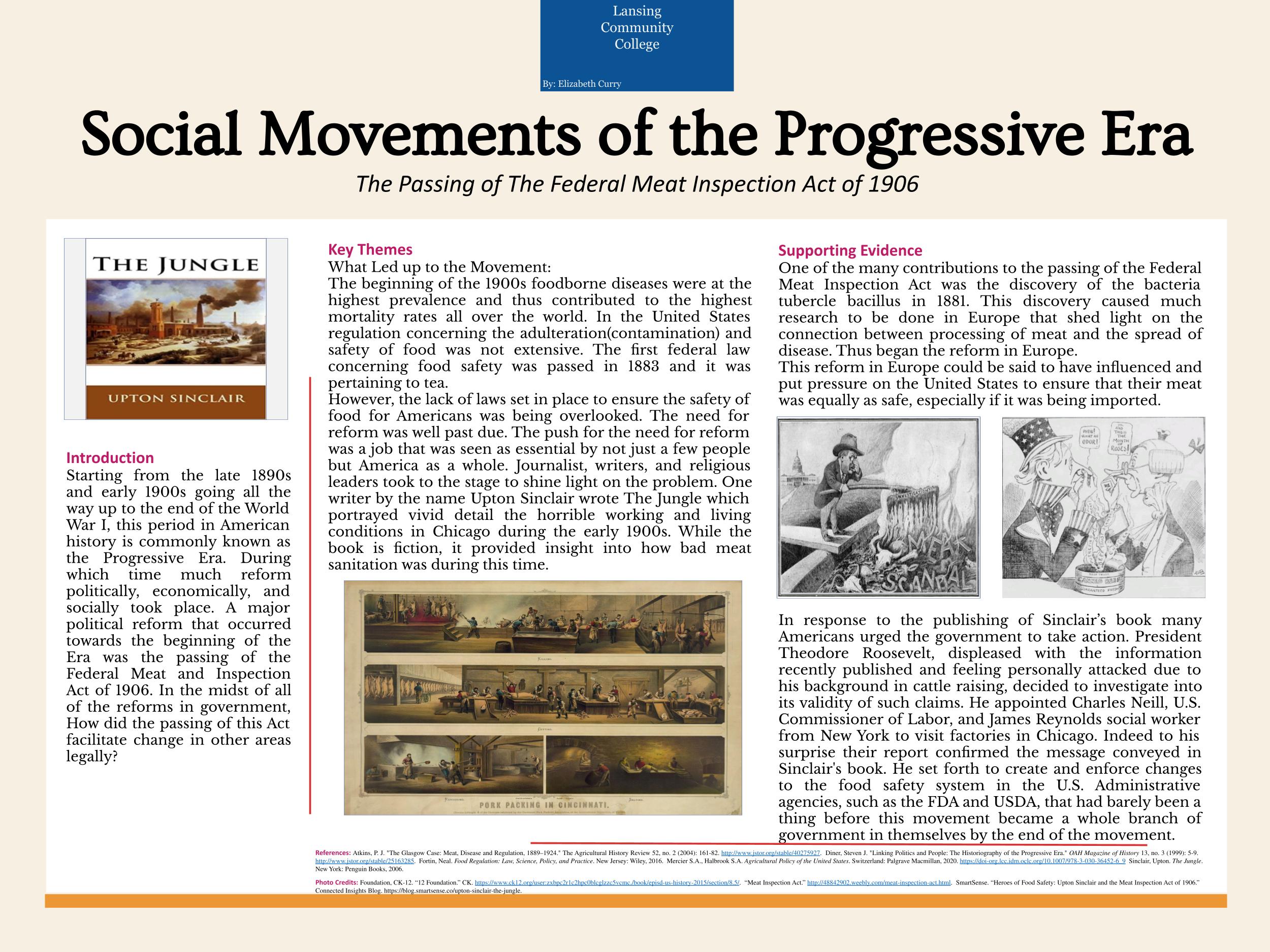 The second picture (located in the middle) depicts what the packing and processing of meat (specifically pork) was like during the 1900s in Chicago. Essentially it shows an assembly line.

The third image is a political cartoon showing that the investigation President Theodore Roosevelt conducted of the meat industry scandal resulted in the discovery of the toxic practices of the time.

The fourth image is also a political cartoon showing Uncle Sam and someone from England talking about the odor coming from the can of beef between them. From the can in the form of fumes comes the words: Meat scandal, putrid beef, and cholera. This image depicts how unsafe and unsanitary the meat was during that time period.

Social Movements of the Progressive Era: The Passing of The Federal Meat Inspection Act of 1906

Starting from the late 1890s and early 1900s going all the way up to the end of the World War I, this period in American history is commonly known as the Progressive Era. During which time much reform politically, economically, and socially took place. A major political reform that occurred towards the beginning of the Era was the passing of the Federal Meat and Inspection Act of 1906. In the midst of all of the reforms in government, How did the passing of this Act facilitate change in other areas legally?

What Led up to the Movement?

The beginning of the 1900s foodborne diseases were at the highest prevalence and thus contributed to the highest mortality rates all over the world. In the United States regulation concerning the adulteration(contamination) and safety of food was not extensive. The first federal law concerning food safety was passed in 1883 and it was pertaining to tea.

However, the lack of laws set in place to ensure the safety of food for Americans was being overlooked. The need for reform was well past due. The push for the need for reform was a job that was seen as essential by not just a few people but America as a whole. Journalist, writers, and religious leaders took to the stage to shine light on the problem. One writer by the name Upton Sinclair wrote The Jungle which portrayed vivid detail the horrible working and living conditions in Chicago during the early 1900s. While the book is fiction, it provided insight into how bad meat sanitation was during this time.

One of the many contributions to the passing of the Federal Meat Inspection Act was the discovery of the bacteria tubercle bacillus in 1881. This discovery caused much research to be done in Europe that shed light on the connection between processing of meat and the spread of disease. Thus began the reform in Europe.

This reform in Europe could be said to have influenced and put pressure on the United States to ensure that their meat was equally as safe, especially if it was being imported.

In response to the publishing of Sinclair’s book many Americans urged the government to take action. President Theodore Roosevelt, displeased with the information recently published and feeling personally attacked due to his background in cattle raising, decided to investigate into its validity of such claims. He appointed Charles Neill, U.S. Commissioner of Labor, and James Reynolds social worker from New York to visit factories in Chicago. Indeed to his surprise their report confirmed the message conveyed in Sinclair’s book. He set forth to create and enforce changes to the food safety system in the U.S. Administrative agencies, such as the FDA and USDA, that had barely been a thing before this movement became a whole branch of government in themselves by the end of the movement.