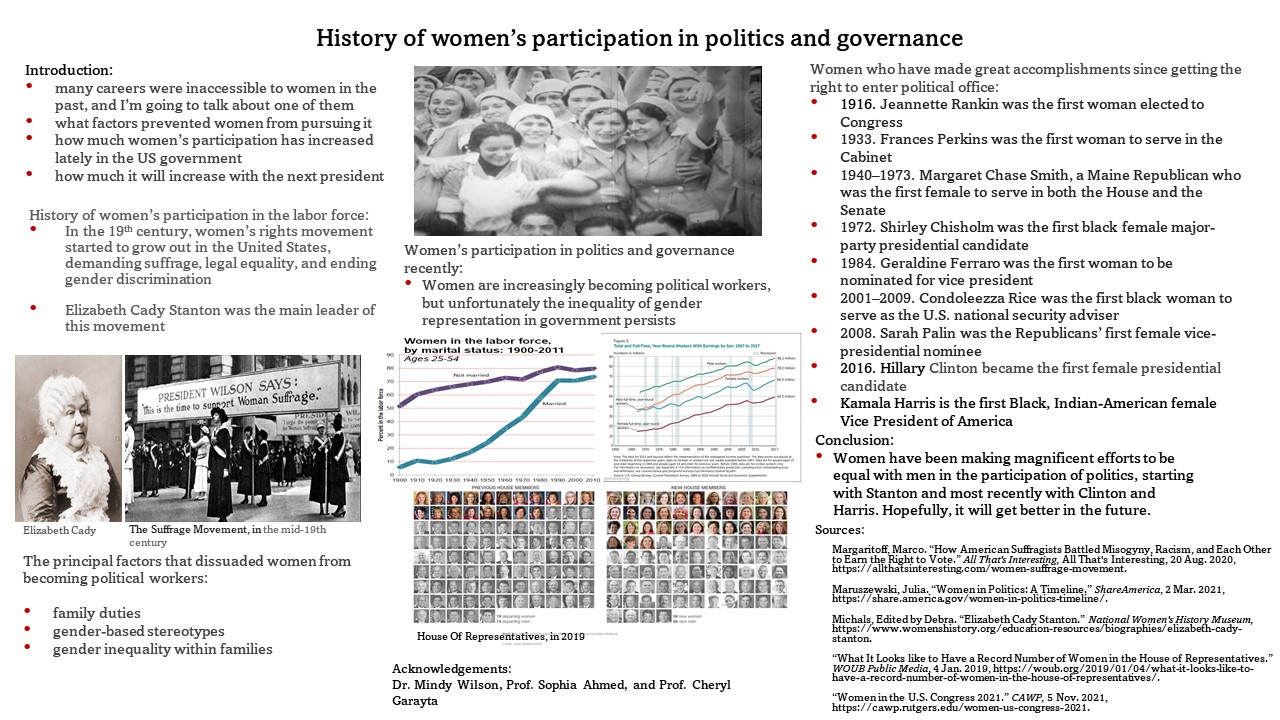 History of women’s participation in politics and governance

My presentation is about one of the many careers that were inaccessible to women in the past, as there were some factors that prevented women from pursuing it. In addition, I’ll talk about how much women’s participation has increased lately in the US government, and how much it will increase with the next president.

History of women’s participation in the labor force

In most countries, women are underrepresented in politics, especially in the past, when it was very difficult to find female workers in government. In the early 19th century and prior, women used to avoid getting into politics because of several reasons, such as: less self-confidence, not having the same rights as men, family responsibilities, etc. In 1848, Elizabeth Cady Stanton became the first woman to run for the U.S. House of Representatives. She lost the race but ended up leading the American Equal Rights Association. During her reign, the first women’s rights convention in the U.S. took place, and this resulted in a declaration demanding suffrage, legal equality, and ending gender discrimination. Consequently, women received the right to vote and started to get into political offices one by one. Since that time, women have been trying to increase participation in political life through education on the country’s affairs and strengthening their self-confidence. Women were ineligible to become politicians, however, after Elizabeth Cady Stanton became the first female leader of the women’s rights movement in the U.S., the opportunities for women to get involved in politics have been gradually increasing.

The principal factors that dissuaded women from becoming political workers

There are many factors coming up against women trying to enter politics; one of them is family duties, which causes significant delays for women to pursue political careers and education. Furthermore, some of the stereotypes that women can’t reach the level of men’s abilities and intelligence, and that some careers aren’t proper for them, caused damage to women’s self-confidence and limited their opportunities. Besides, gender inequality within families always exists, and females’ interests are often not represented or under-represented. When these factors appear in society, a woman’s chance to work in political fields decreases.

In the last century, women’s participation in political affairs has been increasing significantly in the United States. Some women had made great accomplishments since getting the right to enter the political office. For instance, in 1916 Jeannette Rankin was the first woman elected to Congress, in 1933 Frances Perkins was the first woman to serve in the Cabinet, from 1940 to 1973Margaret Chase Smith, a Maine Republican was the first female to serve in both the House and the Senate, in 1972 Shirley Chisholm was the first black female major-party presidential candidate, in 1984 Geraldine Ferraro was the first woman to be nominated for vice president, from 2001 to 2009 Condoleezza Rice was the first black woman to serve as the U.S. national security adviser, in 2008 Sarah Palin was the Republicans’ first female vice presidential nominee, and in 2016 Hillary Clinton became the first female presidential candidate. Nowadays, Kamala Harris is the first Black, Indian-American female Vice President of America. Women are increasingly becoming political workers, but unfortunately, the inequality of gender representation in government persists. There are currently 144 women in Congress or 26.9% of the 535 members. I personally believe women’s representation in politics will elevate more in the future.

Women didn’t have rights and weren’t able to contribute to the country’s politics in the past because of many obstacles. Since the first women’s rights convention established by Elizabeth Cady Stanton, women’s representation in politics has been growing progressively. Women have been making magnificent efforts to be equal with men in the participation of politics, starting with Stanton and most recently with Clinton and Harris. Hopefully, it will get better in the future.

“What It Looks like to Have a Record Number of Women in the House of Representatives.” WOUB Public Media, 4 Jan. 2019, https://woub.org/2019/01/04/what-it-looks-like-to-have-a-record-number-of-women-in-the-house-of-representatives/.

Desegregation of Schools and Ruby Bridges

The Effects of the counter Culture Movement