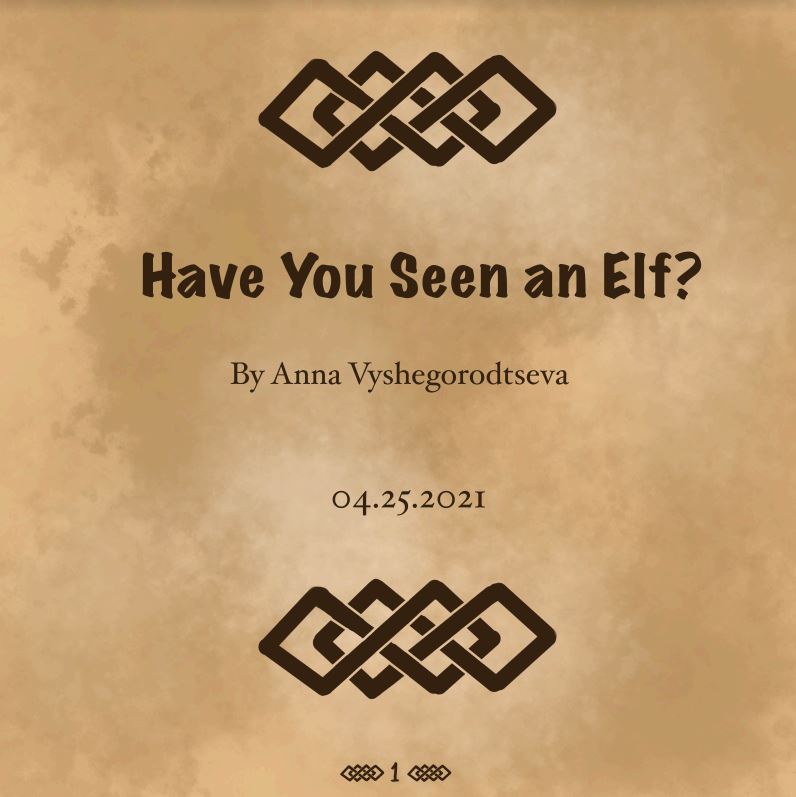 Have You Seen an Elf?

You can read the book I created online with illustrations at Have You Seen an Elf? or read the story text below.

As I run between blueberry bushes and tall golden pine tree trunks, up the hill in the land of Norway; as I climb through the brushwood to reach for a mushroom in the heart of the woods in Russia; as I stroll with my dog down a thin path through the changing forest in Michigan, my imagination bursts into flames. All these places seem like great lands for the elves to make their hidden homes. I dream of tall lean figures dancing in the rays of the setting sun, their transparent skin mirrored on the water of a forest lake, glimmering like an ancient silver shield, surrounded by the lace of the trees on its shores. Well, why do I imagine elves in such a way? It is the folk tales and the images, which fantasy has created for us that make up my picture, even though the original reason why people thought of the elves was to answer some questions.

Elves are a part of different mythologies. Professor Geller, author of several articles for the mythology.net website, explains they can generally be found in European myths. Encyclopedia Britannica tells us, “Elf, plural Elves, in Germanic folklore, originally, a spirit of any kind, later specialized into a diminutive creature, usually in tiny human form”. Elves also play an important role in Norse mythology. The UXL Encyclopedia of World Mythology informs us that they are represented by two kinds: the dark elves and the light elves. They create special artifacts for gods, keep guard of gold and precious stones underneath the earth and work in mines.

Yet, the history of elves does not stop with the old legends, it goes further and eases itself into fantasy novels of our times. Some of the most well-known elves are the elves of J. R. R. Tolkien and J. K. Rowling. Jacqueline Simpson, a British researcher and writer on folklore and legends, states that Tolkien’s elves are shown as noble, wise, beautiful and immortal, living in the forests of Middle-Earth, though they are not sinless. Rowling’s elves, on the other hand, are pictured as house-servants who are human’s slaves. How come all these creatures bare the same name but not the same features? They all originate in the old myths but are brought up to us in this new literature.

People have always been interested in elves. In the olden days they used elves to explain why bad things happened. Why did a child become sick? Why did the flour disappear from the bucket? It’s because some elf cast a spell on the child and stole all the flour. But in some places in the world this way of viewing elves has not changed. For Icelanders elves are quite real. Jenna Gottlieb, an Iceland-based freelance writer, tells us that a group, known as “Friend of Lava”, tried to stop a highway project near Reykjavik, the capital of Iceland, because elves live in the area, and the road would disturb them. For the Icelanders elves represent nature that humans must respect.

So, why should we care about elves? Elves live in old legends, modern fantasy and even in some places in today’s world. They were important for people long time ago, but they are still important for us today. They represent natural things and support people’s imagination. We need them to stay there to help us see the world differently. So, if you ever go to Iceland, be careful not to hurt an elf.

COVID-19 and Underserved Populations in Michigan