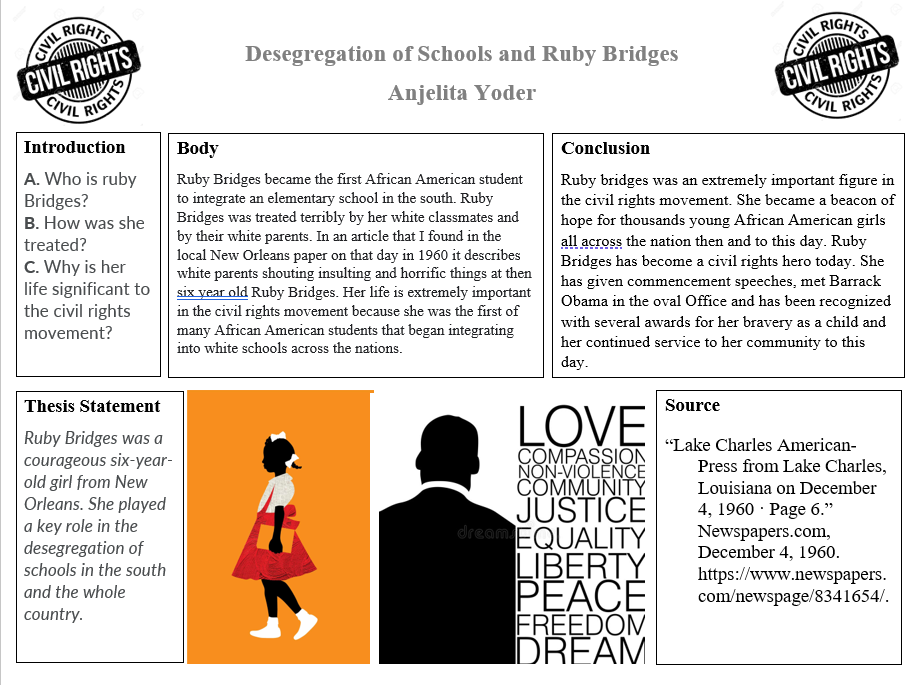 Desegregation of Schools and Ruby Bridges

My presentation is about Ruby Bridges. The purpose of this poster sis to convey the courage and strength Ruby Bridges had in 1960 when she became the first African American student to integrate in white schools in the south.

A. Who is Ruby Bridges?

B. How was she treated?

C. Why is her life significant to the civil rights movement?

Ruby Bridges was a courageous six-year-old girl from New Orleans. She played a key role in the desegregation of schools in the south and the whole country.

Ruby Bridges became the first African American student to integrate an elementary school in the south. Ruby Bridges was treated terribly by her white classmates and by their white parents. In an article that I found in the local New Orleans paper on that day in 1960 it describes white parents shouting insulting and horrific things at then six-year-old Ruby Bridges. Her life is extremely important in the civil rights movement because she was the first of many African American students that began integrating into white schools across the nation.

Ruby Bridges was an extremely important figure in the civil rights movement. She became a beacon of hope for thousands young African American girls all across the nation then and to this day. Ruby Bridges has become a civil rights hero today. She has given commencement speeches, met Barrack Obama in the Oval Office and has been recognized with several awards for her bravery as a child and her continued service to her community to this day.

Media Description: Poster by Anjelita Yoder about Desegregation of Schools and Ruby Bridges

The Evolution of Women’s Rights throughout American History

History of women’s participation in politics and governance