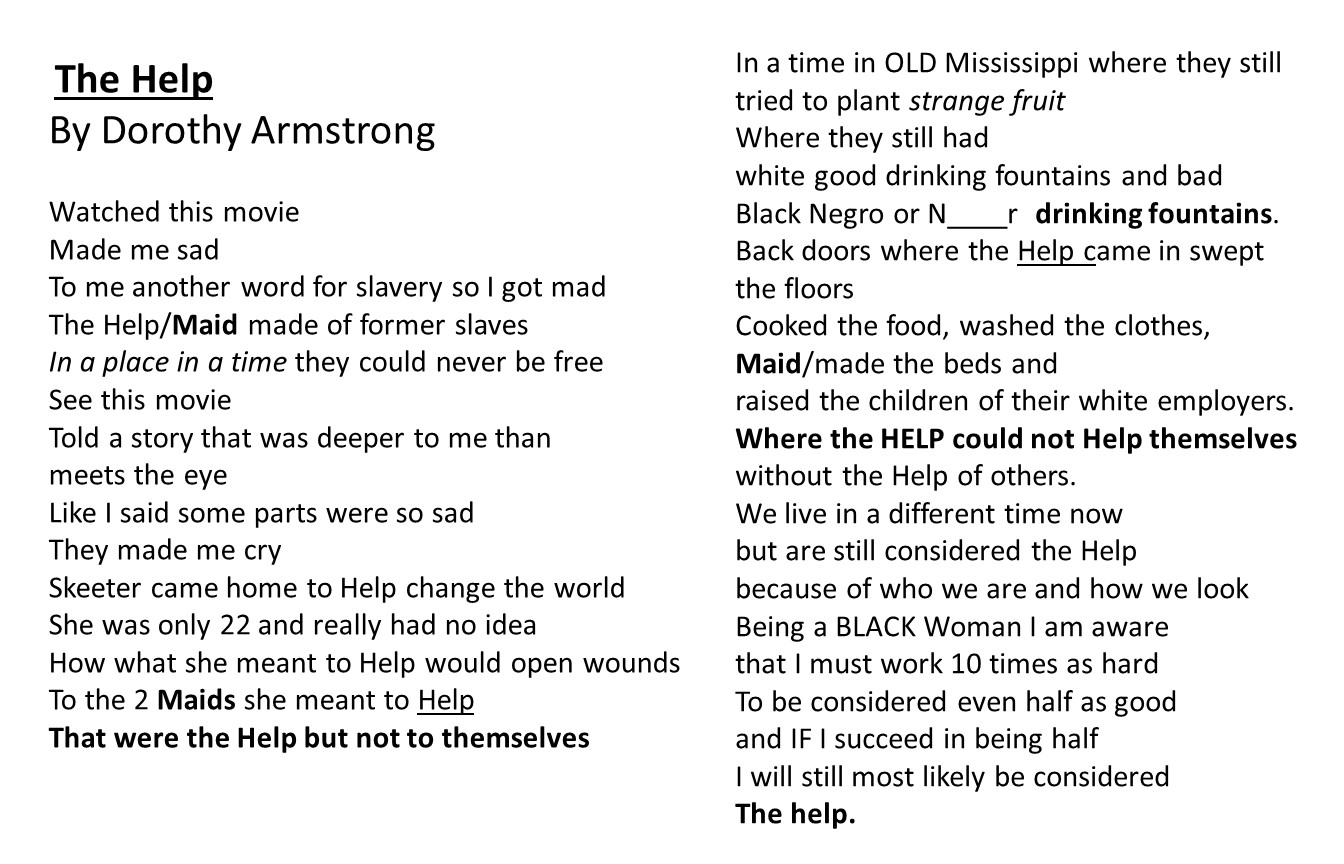 A poem inspired by the movie

To me another word for slavery so I got mad

The Help/Maid made of former slaves

In a place in a time they could never be free

Told a story that was deeper to me than

They made me cry

She was only 22 and really had no idea

How what she meant to Help would open wounds

To the 2 Maids she meant to Help

That were the Help but not to themselves

Where they still had

Back doors where the Help came in swept the floors

Cooked the food, washed the clothes,

raised the children of their white employers.

Where the HELP could not Help themselves

without the Help of others.

We live in a different time now

but are still considered the Help

because of who we are and how we look

Being a BLACK Woman I am aware

that I must work 10 times as hard

To be considered even half as good

and IF I succeed in being half

I will still most likely be considered

I wrote this poem to reflect what I saw in the movie and how it made me feel. Also, when speaking of the Maid/made I use this to show that even though they were supposed to be free they were still made to be subservient to the prominent white families that employed them. I used italics for “in a place in a time” to show the suffering was not limited to that place and time. The separate drinking fountains and having to use back doors were reminders of how the people were thought of as less than white people during that time. I felt a strong personal connection to the maid because I also had to work 10 times as hard to be considered half as good. I worked very hard in manufacturing for way too many years and had little to show for it.

Both my parents are from the South and have told us stories about growing up there. I was raised hearing stories about the mistreatment of black people. They struggled almost every day and did the jobs of maids and field hands. My father and his brothers were sent up North by my grandmother because she did not want them to become Strange Fruit. The phrase strange fruit, which I used in the poem, came from the great blues singer Billy Holiday and described the lynching of the black people in the South. What I can do and have done to help equality for all people is raise 10 children who believe in their abilities and rights and inspire many people as well.

Media Description: The poem The Help by Dorothy Armstrong